The Golden Elixir: A deep revealing of the origins of Tai Chi and Baguazhang with Scott Park Phillips

Day one: Setting the stage for the Golden Elixir

The golden elixir is a reversing of the normal ordering of perception-action. It spontaneously arises from the combination of well established emptiness and expanded spatial perception. It is the source of all Internal Martial Arts.

• Emptiness (How To)—
A series of lessons constructed around experiencing everyday emptiness, desirelessness, and stillness in motion

• Orthodox Daoist Daoyin—
An introduction to the body-mind boundaries of being human. This is the source code for all qigong.

• Exploring animal embodiments as a source of healing and energizing—
The Daoyin of Paulie Zink, sometimes called Yin-yoga but re-animated for maximum Daoist-theatricality

• Birthing the Immortal Egg—
The Immortal Egg is another name for the Golden Elixir. When all intent-desire is released from the body it floats around us like a protective egg. In kinesiology this region of the mind-body is called “peri-perceptual space.” In Daoism we call this the Qi body, which is a buffer between our physical-body and our spatial imagination, which Daoists call Shen (spirit).

• Balance/Counter Balance—
Since Tai Chi became popular in the West most people are familiar with the idea of the Dantain (Elixir Field), but what is it really? It is an innate element of human movement which under normal conditions is fully operative but unconscious. These session will make you fully conscious of your Dantian.

• Working with the Center!—
Your own and other people’s too

• Using relaxation and stillness as a springboard for more embodied liveliness

Day four: Dance—Doing all of the above in great traditional dances from around the world

*Experience with Tai Chi, Baguazhang, or Qigong is not a pre-requesites. Beginners are welcome, and should understand that this sort of practice relies on developing a disciplined daily practice. If you have that in any realm, you will love this workshop.

Register For Lodging, Meal and Tuition - ALL INCLUSIVE

Guests who are registered for a program but choose not to stay on our campus are required to pay a Commuter Fee. This fee covers Lunch in our Dining Hall and full access to our campus amenities. To register, please select "Commuter" option in the booking link 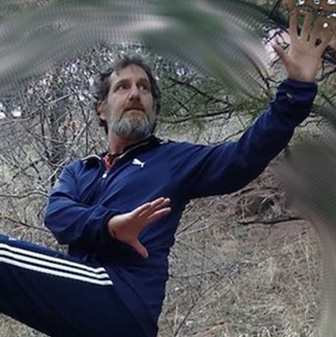 Some might say that Scott teaches traditional Chinese Martial Arts in a non-traditional way. Others might counter that Scott is accessing the original intent of the creators of Chinese Internal Martial Arts to get at the core of their inspiration.

At the age ten Scott Park Phillips began studying the traditional opera style of Northern Shaolin with Bing Gong, although at the time he was told nothing about its connections to opera. Bing was a noted disciple of Kuo Lien-ying, one of the first teachers of Chinese Martial Arts in the West. With Bing he also learned Tai Chi and Yiquan.

Scott first studied improvisational theater at age fifteen with the legendary Keith Johnstone, beginning a commitment to fostering the spontaneous in everything he does as the perfect and necessary balance to discipline and systemization.

A professional Modern Dancer in his twenties, Scott was drawn to apprentice in the exquisite high arts of North Indian Dance with Pandit Chitresh Das, and Congolese Dance with Malonga Casquelourd. Living in San Francisco during the height of the ethnic dance explosion, he danced with masters of traditions from all over the world. This combination of depth and breadth gave Scott a unique perspective on human movement.

From this experience Scott realized that we were not getting the straight story on the origin of Chinese Martial Arts. Loving the depth that these arts reveal, he began immersing himself in Chinese culture, religion and history to find out why they were full of theatricality, dance, and religious cosmology.

In 1989 Scott began studying with George Xu, a noted martial artist who has been influential in the Internal Martial Arts community for four decades. Xu’s genius is that he has continuously travelled around China seeking out its greatest masters, sometimes bringing them to the United States to teach, but always learning from them, assimilating the experience, and then sharing it. Studying with him year to year is to have previous concepts and perceptions regularly flipped upside down or reversed—itself a primary characteristic of the Golden Elixir.

Scott was an intimate disciple of the late Daoist master Liu Ming for ten years. Liu Ming transmitted the Orthodox Daoist methods of the Golden Elixir (Jindan), Non-conceptual Meditation (Zuowang), Daoyin (emptying and transforming), and Dreaming. However, unlike most modern education, the way Liu Ming taught was to de-emphasized the methods themselves. His teaching style, languid and disheveled, was a constant expression of a particular Daoist view of the human relationship to ritual and being.

Seeking innovation with depth, Scott developed a strong relationship with self-defense maven Rory Miler and subsequently invented a way to use common dance ideas to teach modern self-defense. As crazy and counter intuitive as it sounds, it turned out that dance is a better tool for teaching self-defense than martial arts.

Scott collaborated with Michael DeAgro in pioneering the use of Daoyin as a core movement practice used to transmit advanced Asian bodywork and Traditional Chinese Medicine. They then developed this material into consecutive year long masters level training programs in Chicago. Over the years Scott has sought out Somatic collaborations, notably with Body-Mind-Centering and Alexander Technique.

And finally, Scott is an author and one of the founders of the field of Martial Arts Studies, his original research re-wrote the history of Chinese Martial Arts, especially the arts of Tai Chi and Baguazhang, bringing into focus the importance of religion and theater in the development of these arts as well as the influence of Chinese Christian Secularism in obscuring these origins.